To view our current in stock Western Americana Book collection of 1,000 +,- Titles, along with current prices, please visit www.biblio.com and search Oasis Books, Gloucester, Virginia from the booksellers list.  The following is an dated sampling.

This volume is one of the few definitive works written by a European based on his first hand observations of time spent with the Blackfeet Indians.  There is much information contained herein about the Plains Tribe and credit must be given to McClintock for his “narrative of his experiences among the Blackfeet” at the time of its publication.  A rather scarce and definitive work on this most prominent North American Plains Indian Tribe that ruled the great Buffalo Hunting Grounds along the Rocky Mountain Front from current day Calgary, Canada, to Three Forks, Montana and eastward into the great plains region.

One might also look to James Willard Schultz and Adloph Hungry Wolf, for additional works by early white immigrants on the Blackfeet Society, as well as the works of more recent authors such as Ewers, Dempsey, Farr, B. Scriver & M. Scriver among others.  It must be noted that the late Louise Cobell did much in her role as a Tribal Member to advance the process of accountability due the Blackfeet from generations of botched handling of Trust Funds held in behalf of the interests of the Blackfeet, by the U. S. Government.

MEACHAM, HON. A. B. “Wigwam And War-path; or the  Royal Chief In Chains.  Ex-Superintendent of Indian Affairs and Chairman of the Late Modoc Peace Commission.  Illustrated by Portraits of the Author, Gen. Canby, Dr., Thomas, Capt. Jack, Schonchin, Scar-Faced Charley, Black Jim, Boston Charley, Tobey and Riddle, and Eleven Other Spirited and Life-Like Engravings, of Actual Scenes from Modoc Indian Life, as Witnessed by the Author.”

From the preface: “None, it seems to me, can per=use the work without being charmed with the love of justice and the fidelity to truth which pervade its every page, as well as the manly courage with which the writer arraigns POWER for the crime of crushing WEAKNESS – holding our Government to an awful accountability foe the delays, the ignorance, the fickleness and treachery of its subordinates in dealing with a people whose very religion prompts them to wreak vengeance for wrongs done them, even on the innocent.”

“For the lover of romance and of thrilling adventure, the work possesses a charm scarcely equaled by the enchanting pages of a Fennimore Cooper; and, to the reader who appreciates truth, justice, and humanity, and delights to trace the outlines of such a career as Providence seems to have marked our for the author, as well as for the unfortunate tribes whose history he has given us, it will be a reliable, entertaining, and instructive companion.”

“Mr. Meacham’s thirty years’ experience among the Indian tribes of the North-west, and his official career as Superintendent of Indian Affairs in Oregon, together with his participation in the tragic events of the Lave Bed, invest his words with an authority which must outweigh that of every flippant politician in the land, whom to secure the huzzas of the mob, will applaud the oppressor and the tyrant one day, and the very next day clamor mercilessly for their blood.”  D. L. Emmerson, Boston, Oct. 1, 1874

A rather large volume in dark brown/black original publishers cloth, blind stamped front board with bright Silver Gilt Title to spine with dancing Indian and Publisher in bottom of spine. Sound Binding with no marks or interior foxing.  This copy is VG+.  Reference Six Guns 1474 – Modoc History – Scarce in this condition.

STANSBURY, HOWARD:  “Exploration and Survey of the valley of the Great Salt Lake of Utah, including a Reconnoissance of a New Route Through the Rocky Mountains”  Senate Special Session, March, 1851 Executive No. 3.  Lippincott, Grambo & Co. Philadelphia 1852.  First Edition, First Issue (ie, lacking the instructions and references directing Stansbury to explore the “newly established Mormon settlements…” – which is present in the Second Issue)  with 2 large maps in a separate portfolio volume w/gilt Title.  A major American West exploratory and cartography effort.  487 pages.  VG+ Octavo Brown Cloth w/Gilt Spine complete with folding  panoramics, plates, charts, tables and extensive appendices.  Matching Pay folio is worn, spotted, with 2 – 1” holes in spine, chewed bottom edge rear board, however both large maps are in VG condition.  Currently housed in custom clamshell with two compartments, one for the book and one for the map folio. 6-9, 9-10, lec

EMORY, W. H. , Major Corps Topographical Engineers  “Notes of a Military Reconnoissance, from Fort Leavenworth, in Missouri, to San Diego, in California including parts of the Arkansas, Del Norte, and Gila Rivers.”

LIST OF PLATES – ‘EMORY’S RECONNAISSANCE IN NEW MEXICO AND CALIfORNIA 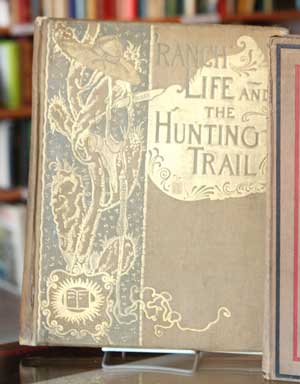 ROOSEVELT, Theodore  “Ranch Life and the Hunting Trail”  First Edition, First State in Tan Cloth Mesh, Not the Smooth Brown Cloth.  It is boxed.  This copy belonged to Merle Johnson, who broke up his collection in May 25, 1930 and has inked a testament on the FEP in ink, that says “This is the book from This is the real 1st. binding in the tan-mesh cloth – other copies of this size have a smooth brown cover.

Tipped in on 2ndFFEP is a sketch “China or bust… of a man walking carrying a case with the name Ralph Rasberry”  with additional note: “This is an original sketch by Remington of Julian Ralph – Remington closet friend and collabarateur whom he humoursly called Ralph Rasberry – Merle Johnson. 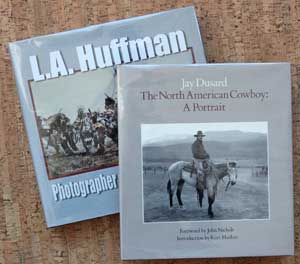 PETERSEN, LARRY LEN;  “L. A. HUFFMAN – Photographer of the West”.  Settlers West Galleries, Tucson, Arizona. 2003.  Massive and most complete to date work of this “Brady of the west”, L. A. Huffman worked out of Miles City, Montana.  This volume of 296 pages with Index, contains even some photographs not previously published.  Introduction by Gene and Bev Allen, who were largely responsible for its publication.  Another fine work by Petersen.  First Edition, limited to 2,000 copies.  A special limited edition which was leather bound, boxed and signed was also released simultaneously. – Price: $350.00 – Sold