The following titles are a sampling of previous stock.  Some have been sold. Please visit our complete Native American list on in stock books with current prices at www.biblio.com and choose Oasis Books, Gloucester, Virginia from the booksellers list on the home page.  Search by keyword, Native American, or Title/Author.

From the Title Page: “Missionary Labors and Adventures among the Wild Tribes of the North American Indians, Embracing Minute Description of Their Manners, Customs, Games, Modes of Warfare and Torture, Legends, Tradition, etc.  All from Personal Observations Made during Many Thousand Miles of Travel, with Sketches of the Country from St. Louis to Puget Sound and the Altrabasca.  Edited from the original unpublished manuscript Journals and Letter Books and from his Printed Works with Historical, Geographical, Ethnological and other Notes; Also a Life of Father De Smet – MAP AND ILLUSTRATIONS – Published by: Francis P. Harper, New York 1905 – Copyright, 1904 by Francis P. Harper All rights reserved.

This set was previously housed at Eden Hall, Convent of the Sacred Heart Library, Torresdale, Phila. Pa. The volumes are lightly worn with no markings other than the usual library identifications, the gilt is good+. The spines of Volumes III & IV have been professionally repaired using the original cloth (just minor loss at bottom of Vol. III and top of Vol. IV. Hinges of Vol. III have been professionally taped. Each volume shows light discoloration, which presumably occurred when the spine library identification marks were removed.  Overall a VG- set of this scarce work in its original cloth and un-cut edges.

Volume I: Preface vii; Chapters I through XIII Pages 1-146 cover – Jesuits in America, Early Life of Father De Smet, A Romance of an Indian mission, The Flathead Mission, The Oregon Missions, The Great Council fo 1851, The Utah and Oregon Expeditions, Journeyings at Home and Abroad, Peace Commissions, Character of Father De Smet, The Indian and the Missionary, Views Upon Public Affairs and Literary Work.

PART I. Pages 147-192 cover 4 Chapters – The Potawatomi Mission, 1838-1839, Journey to Council Bluffs, Comments of the Situation, Daily Life at the Mission, Excursion to the Sioux Country.

PART II. PAGES 193-402 cover XI Chapters – The Flathead Mission, St. Louis to Green River Rendezvous, Green River Rendezvous to Three Forks of Missouri, Return from Three Forks to St. Louis, A Second Account of the Journey of 1840, St./ Louis to the Platte River, 1841, From the Platte River to the Bitter Root Valley, Founding of St. Mary’s Mission, Journey to Fort Colville and Return, Affairs at St. Mary’s 1841-42, Journey to Vancouver and the Willamette and Return, and Return to St. Louis in Fall of 1842.

Volume II – Part III The Oregon Missions pages 403 – 612 in IX Chapters; The voyage Around Cape Horn in 1844, The Voyage Around Cape Horn, Planting New Missions, Expedition to the Blackfeet Country – St. Ignatius to Fort Augustus, Return from Fort Augustus to the Mission, Among the Missions, Peace Between the Blackfeet and Flatheads, Three Weeks in a Blackfoot Camp, Return to St. Louis.  Part IV – The Great Council of 1851 and Preceding Events; pages 613-692 in IV Chapters; Expedition to the Sioux, 1848, En Route to the Great Council, En Route to the Great Council, The Great Council and Return to St. Louis.  Part V The Utah and Oregon Expeditions of 1858-59 and Some Preceding Events pages 693-776 in V Chapters; Ocean Voyages of 1853 and 1857, The Mormon Expedition of 1858, The Oregon Expedition of 1858-59, Peace with the Oregon Indians, Return to Dt. Louis.  Part VI – From 1860 to Father De Smet’s Death 1873 Pages 777-794 in I Chapter, Voyages to Fort Benton in 1862 and 1863.

Volume III – Part VI continued with Chapters II through VII pages 795-932; Return to St. Louis Via Panama, Peace Mission to the Sioux in 1864, Ocean and River Voyages of 1865 and 1866, Expedition of 1867 to the Hostile Sioux, The Peace Commission of 1868, and Last Journeys of Father De Smet.  Part VII, The Indians in XIII Chapters, pages 933-1211, Religious Opinions of the Assiniboins, Notes on the Blackfeet, The Oregon Indians, Notes on the Pawnees, Notes on Certain Western Tribes, Manners and Customs of the Indians, Religious Beliefs, Indian Legends and Traditions, An Old Delaware Legend, Tchatka, the Chief of the Assiniboins, Louise Sighouin, An Indian Woman of the Coeur D’Alene, History of the Family of Le Gros Francois and The Indian Question. 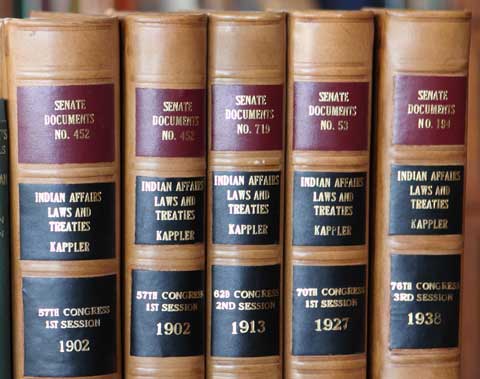 Volume I in 1903 by the U. S. Government Printing Office which contained “Statutes, Executive orders, Proclamations, and Statistics of Tribes” Compiled to December 1, 1902.

Volume III “(LAWS)” Compiled to December 1, 1913. Compiled, Annotated, and Edited by Charles J. Kappler, of the Bar of the District of Columbia. Washington 1913.

Volume V “(LAWS)” Compiled from December 22, 1927, to June 29, 1938. Compiled, Annotated, and Edited by Charles J. Kappler of the Bar of the District of Columbia. United States Government Printing Office, Washington: 1941

All Five Volumes have been completely re-bound and re-sewn, and are bound in full calf skin leather faux light aging, and have new end papers, reinforced by library tape.  Some volumes the pages have been cut down slightly so that all five volumes are exactly the same height.  The bindings have identical spine construction consisting of 8 Raised Bands with four tipped in leather labels.  The top label, which is burgundy leather, indicates in bright gilt lettering, “Senate Documents NO. 452, 452, 719, 53 & 94 respectively. The Second to top label, in black leather, reads, in bright gilt lettering, “INDIAN AFFAIRS – LAWS AND – TREATIES – KAPPLER.  The Third label from the top, again in black leather with bright gilt lettering indicates the year and the specific Congress and the Session number, as well as the year.  Finally, at the bottom between the 6th & 7th band, is a small black leather label with the vol. # of this set.

A beautifully bound presentation and collectors set of what is perhaps the most important historical recordation of Treaties and Laws that came out of the United States Government regarding the Native North American Indian. 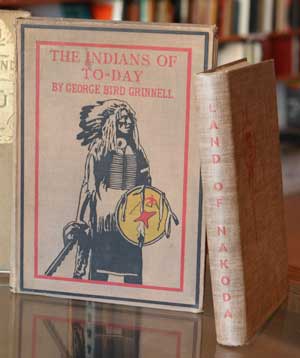 This Volume is VG with only light wear.  Boards are lightly soiled. Binding is tight. Older delicate professional minor repair to top of spine. No internal markings.

This book is inscribed “To: Margaret and Lulita Pritcheett, cousins of my friends – James and Ruth Crawford.” Signed: James Larpenteur Long and dated 7-16-54.  This inscription and signature appear on the interior of the first free endpaper, which is a decorated black, gray and red colored map of “Assiniboine Country”

Contained also is a laid in page from Linda M. Lebsack Books, dated Jan. 11, 207 and titled: Regarding signatures in this book: “Lulita and Margaret Crawford Pritchett were granddaughters of James Crawford who in 1874 staked the first claim in the area of Steamboat Springs, Colorado…..”  Linda M. Lebsack Books is a bookseller “continuing in the tradition of Fred A Rosenstock (1895-1986).

A second signature of the author appears on page 279 under his printed name, James L. Long.  The inked signature of “Holisina Togagike (First Boy) in blue ink. 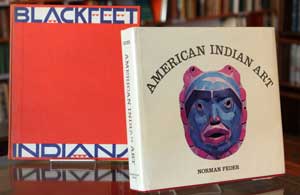 From the jacket:  “The dynamic art and fine craftsmanship of the North American Indian are often considered expressions of an interesting but vanishing primitive culture.  Yet the high degree of sophistication of much of this art, the endless variations of motifs, and the sheer aesthetic beauty of many of these works warrant continual reconsideration.  This volume is a study of the whole range of artistic expression of these vital peoples – the pottery and silverwork of the Pueblos of the Southwest, the wooden masks of the Eskimo and the Tlingit, the beadwork of the Plains and Pacific Plateau tribes, and the basketry of the California natives, to name only a few.”

“Norman Feder, Curator of American Indian Art at the Denver Art Museum, has accepted the challenge of dealing with a subject whose source material is woefully scant.  Approaching his topic from the point of view o the art objects themselves, he manages to make a comprehensive whole of a subject burdened with disparities.  In connected sections, he explores such aspects of American Indian art as its origins, its stylistic variations from tribe to tribe, the materials used, the ecological aspects involved, and the future of the art.  Mr. Feder’s familiarity with the work of many Indian artists practicing today adds yet another dimension to his knowledge of the subject, and he has included examples of the work of gifted modern painters and sculptors.”

“The art forms of the American Indian nations of the Great Plains, the Southwest, California, the Great Basin, the Pacific Plateau, the Northwest, the Arctic, and the Woodlands are discussed and illustrated in color and black-and-white.  The ample plates, which relate to and supplement the text, provide essential documentation and visual excitement.  A full bibliography is included for those who wish to make further investigations into more specific aspects of this fascinating and truly “American” art.”

Story by: LINDERMAN, FRANK B.  “Blackfeet Indians”, Pictures by Winold Reiss.  Published May 11, 1935 The Twenty-Fifth Anniversary of the Establishment of Glacier National Park by the Congress of the United States.. Copyright 1935, Great Northern RY. St. Paul, MINN.

From the Foreword – “This book really needs no introduction.  It is a book of beauty that is sadness; of courage that inspires; of duplicity that makes a white man’s conscience squirm.  It is a book of loneliness, the awful loneliness that fills the world from earth to sky, when a soul has lost its gods, its faith, its bearings.”

“It was created in response to calls from people, who through their visits to Glacier National Park, became interested in the Blackfeet Indians of the adjoining reservation and were anxious to learn something of their life before the reservation hemmed them in and made them farmer-ranchers; and, also, in response to calls from persons, who having seen isolated examples of Winold Reiss’s paintings of the Blackfeet, wanted an authentic collection of his work.  Having access to the colorful portraits that Mr. Reiss has made among the Bloods and Piegans, the Great Northern Railway asked Frank Bird Linderman, author of ‘Indian Why Stories, The American’, and other books about the plains Indians, to write the story of the Blackfeet as he learned it by a lifetime of spoken and sign-language inquiry among the Old Ones of the tribe; the Old Ones who remember legends and records of their nomadic forbears.”

From: “Out Of The North” By Frank B. Linderman  “BLACKFEET! no tribal name appears oftener in the history of the northwestern plains; no other is so indelibly written into the meager records of the early fur-trade of the upper Missouri river, and non ever inspired more dread in white plainsmen.  hell-gate* was not so named because the water there was fiercely wild, or the mountain trail difficult, but because the way led from tranquillity to trouble, to the lands of the hostile Blackfeet. “The three tribes of the Blackfeet nation, the Pecunnies (Piegans), Bloods, and Blackfeet, are one people.  They speak a common language, and practice the same customs.  Long ago, probably more than two hundred years, the Blackfeet were a timber people inhabiting the forests near Leser Slave Lake.  Incessant war forced upon them by the powerful Chippewas (Ojibwas) pushed them steadily southward until they reached the wide plains bordering the Rocky Mountains in what is now Montana.  Here they found vast herds of fat buffalo, elk, and antelope, an exhaustless abundance they had never known; and here, after driving the Snakes, and probably the Flatheads, Kootenais, and Nez Perces, from the bountiful grass-lands to the narrow valleys west of the Rockies, the three tribes of Blackfeet settled down to become plainsmen…”

Index: “Out Of The North” (Historical) 9