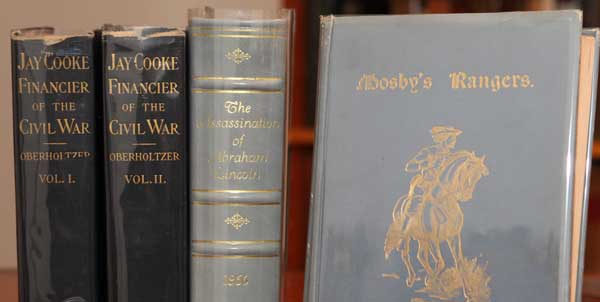 WILLIAMSON, JAMES J.;  “Mosby’s Rangers – A Record of the Operations of the Forty-Third Battalion Virginia Cavalry, from its Organization to the Surrender, from the Diary of a Private, Supplemented and Verified with Official Reports of Federal Officers and also of Mosby; with Personal Reminiscences, Sketches of Skirmishes, battles and Bivouacs, Dashing Raids and Daring Adventures, Scenes and Incidents in the HISTORY OF MOSBY’S COMMAND.  Containing Over 200 Illustrations, Including Portraits of Many of Mosby’s Men and of Federal Officers with Whom They Came in Contact, Views, Engagements, Etc,; Maps of “Mosby’s Confederacy” and Localities in Which he Operated; Muster Rolls, Occupation and Present Whereabouts of Surviving members.  By James J. Williamson, Of Company A.  New York: Ralph B. Kenyon, Publisher. 1896.  Small 4to; 511 Pages; Original Pictorial Pale Blue C>loth with Title in Gilt on Front and Spine.  W/Appendix of Confederate Reports, Federal Reports and Roster of The Forty-Third Battalion Virginia Cavalry, and Index, Signature on ffep.  Very Good Copy.  Quite Rare…First Edition   Howes W-498

“Appendix to Diplomatic Correspondence of 1865.”

“The Assassination of Abraham Lincoln, Late President of the United States of America, and the Attempted Assassination of William H. Seward, Secretary of State, and Frederick W. Seward, Assistant Secretary, On the evening of the 14th of April, 1865.  Expressions of Condolence and Sympathy Inspired by These Events. “

At Oasis Used Books, we strive to maintain a diversified collection of Civil War material, with an additional focus on items relating to Virginia and the surrounding states.

We have sections on Sectionalism, Campaigns, Narratives, Generals, Naval, Nurses, Spies and Slaves during the war. Our primary collection consists of some 200 volumes housed in the main shop between the Revolutionary War and Virginia sections.

In addition, we maintain 3 Rare Book Rooms, one of which houses, among other genres,  an additional 75-100 volumes of older antiquarian volumes.  This collection is open to visitors to the shop upon their inquiry.  A sample of these titles follows: