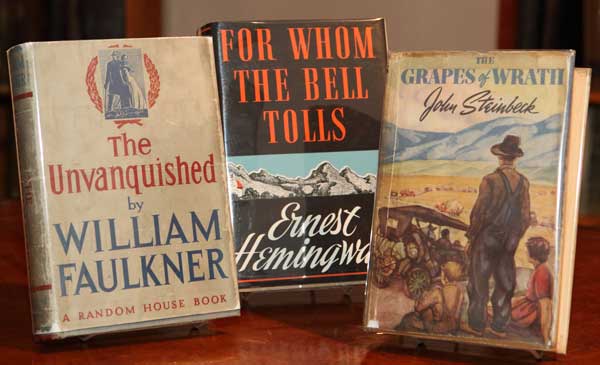 For our current offerings and current prices, please see our listings on www.biblio.com.  Choose Oasis Books, Gloucester, Virginia from the booksellers tab on the homepage and search by keyword “American Literature” or by Title/Author. You may order our books through this site. Please note the following books are subject to prior sale.

From Jacket; “AS was to be expected, Dali’s first venture as a novelist has produced a highly original, disconcerting and fascinating masterpiece that has the passion, intensity and brilliant color that characterize his paintings.

Through a small number of characters who with their private passions are caught up in the maelstrom of history the author evokes a decadent European society as it sinks into vice, sterility and irresponsibility and becomes engulfed in the catastrophe of war.

From the time of the February riots in Paris, the novel takes the reader through the turmoil of French political and social life before the Munich crisis, through the tragedy and heroism of the French people under the defeat and the occupation and beyond, into the peace that follows.

Love is the central theme, and it is played with several variations, one or two of which are the strangest to be found in literature since the writings of the Marquis de Sade.  War, politics, friendship, loyalty, love of the land, heroism are among the subsidiary themes which the author develops in his own original way.  There are passages of unforgettable visualization – the bombing of Malta, the execution of the notary, Pierre Girardin, by the Germans, conspiracies in North Africa, the Prince of Orminy’s suicide, the death of Adolph Hitler, Nostradamus’ prophecy of victory and the end of the war.

Filled with the raciness, the iconoclasm, the shocking unconventionality which this artist’s strange genius seems always to manifest itself, if is rigorously constructed, and the dramatic interest is maintained at a high pitch.”

From Jacket; “The orchestration of two major themes – flight and refuge – is achieved with over whelming force in William Faulkner’s new novel, The Wild Palms.  One of the alternating themes deals with the fierce sexual compulsion between a woman who has abandoned her husband and children and a young doctor whose career is wrecked by their tempestuous love affair.  In a series of highly dramatic episodes, Faulkner portrays first the isolation and then the complete disintegration of a man caught in a passion that borders on madness.

The second theme parallels the first, except that the situation is reversed.  It centers about a convict who is detailed with his mates to stem the ravages of one of the worst floods in the history of the South.  He is swept to an unwanted liberty.  To this fugitive a woman attaches herself, and he finds that the bond that chains them together cannot be broken.  They survive the storm and deluge and near disaster, only to become more closely bound together.  The jail from which the convict has only recently been freed by the flood begins to take on the aspect of a sweet, safe refuge.  How he delivers himself into the warden’s keeping, at last secure and free in prison, provides a magnificent climax to a stirring novel.

The Wild Palms contains the most spectacular situations yet created by William Faulkner.  He has achieved a straightforward and smashing dramatic story in the best manner of his Sanctuary and As I Lay Dying.

From the jacket: “The following description of this book is by the author:

“The book takes up a boy from the ages of consciousness and until adolescence begins.  A wandering family settles in a small Ohio town.  The father is an ex-soldier who becomes, first, a small merchant, then a laborer.  He is unreliable and popular, his mother, hard-working and inclined to silence.

“The idea back of this book, when it formed itself in my mind, was to show the child’s consciousness of the life about him, beginning in a room of a house, going out to other rooms, the entire house, the yard, the street, the town, and finally, to a dim consciousness of the vastness of the world and the smallness of himself in it.

“A part of the experiences that make a child no longer a child are imaginative, a part physical.  I have tried to keep these balanced.  Such a book cannot be highly dramatic.

“What I have tried to give is charm.  It is, or course, partly autobiographical, as such a book would be bound to be, but it is not written as autobiography.  The child is aware of: first his mother, then his father and his brothers and sister.  Their lives at once begin to affect his life.  There is the little circle of family life and the big world outside.  He thrusts out into the world more and more boldly.  What happens to him and his imagination while he is so thrusting out is the story of the book.

“It is at any rate a happy childhood, just as my own was a happy one.”

Robert Frost items for sale:  All books are Hardbound and measure 6” x 9”

“A Witness Tree – New Poems” by Robert Frost.  1943.  Henry Holt First Edition nap 91 pp.  VG/VG- Dust Jacket.  Dark blue/light blue cloth, with gilt title and author on spine and front board. Dust jacket is price clipped and faded with one small 1/2” tear through the “R” in Robert at top of front upper edge. Pencil sketch of Frost on FFEP and rear inside flap of DJ. $65.00

“West-Running Brook”.  by Robert Frost  1928 Henry Holt First Edition – stated. 64 pp.  Dark Green cloth quarter bound over dark green paper boards with 2” x 3” tipped in gold and black drawing of a house on a small hill above a brook. This woodcut, along with three others appear inside as full page illustrations.  Gilt author and title on spine is VG. Light wear to paper edges/corners. $60.00

“A Boy’s Will” by Robert Frost.  1915 Henry Holt  One of 2500 copies printed at The Stinehour Press, Lunenburg, Vermont.  The letterpress plates have been made directly from a copy of the first issue of the first edition of the work.  Collectors reprints, NYC October 1992.  Fine in a glassine wrapper.  Gilt title to spine and gilt outlined box on front dark green boards. $35.00

“A Masque of Reason” by Robert Frost.  1945. First Edition Henry Holt VG/G+ dust Jacket.  23 pp.  Dark blue cloth boards with gilt author & title to spine.  The colorful ‘’Palacias’ illustrated front cover of the dust jacket is cracked and chipped on the spine, especially heavy over the authors name.  The DJ is not price clipped and the rear of the jacket shows a black-and-white photo of the young poet. $47.50

“A Masque of Mercy” by Robert Frost.  1947. First Edition Henry Holt.  39 pp Light blue boards with gilt author and title to spine.  Blue dust jacket is especially faded on spine, is not price clipped, and lists “The poetry of Robert Frost” on the rear. – $42.00

“Come In and Other Poems”  by Robert Frost with commentary by Louis Untermeyer.  1943 Henry Holt First Edition  192 PP. Illustrated by John O’Hara Cosgrave, II.  Biege cloth boards with dark red-brown cabin with smoke and author and title to spine and ‘typical’ New England fenced house/barn tree on front board.  Front and rear boards are lightly bowed outward, inner hinges are cracked.  Dust Jacket is price clipped, has a 1’ vertical tear at front bottom, lightly faded spine and the rear flap consists of the war effort “Our Men Want Books – Send all you can spare”  with instructions as to how to prepare the book for mailing including the going rate of .03/pound and a pre-printed address label to “Commanding General, 4th Corps Area Headquarters, Atlanta, Georgia  – For Ary Libraries. $62.50

“From A Milkweed Pod” by Robert Frost. Henry Holt. 1954 First Edition. Wood Engravings by Thomas W. Nason.  Printed at the Spiral Press, NY  5PP with the preface “A new poem by Robert Frost at Christmas 1954 again comes to you with warm greetings for the holidays from – Henry Holt and Company.  In Mylar sleeve. – $75.00